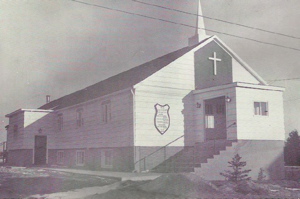 _______________________________________ August 1959 . . .
Reformed Baptist tent meetings, with Randolph Nicholson, Evangelist and Paul Mullen, Song Evangelist. The tent was pitched across from the legion. Converts in those two weeks were Victor and Arlene Freeman and Gertrude Lettney. After the tent meetings we rented a hall where the Venture Centre is now. Rev. Gerald McKinnon was Pastor of the reformed Baptist Church in East Ferry. He came up twice a week to have services. Rev. Merrid Grant (ret.) and family, Hubert Marshall and family were those already here. All of the churches in this District sent $10 a month for two years to help pay the expenses.